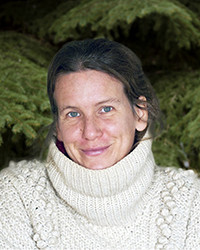 Academic Qualifications: Ngaio Richards is a wildlife biologist and detection dog handler who has had the privilege of fielding in such far-flung places as the Alaskan arctic, the outer islands of west Scotland and the jungles of Cameroon. She obtained a BSc (Hons) in Environmental Science and an MSc in Natural Resource Sciences, for examining the risks that pesticide exposure poses to Eastern Screech owls in apple orchards of southern Québec, Canada. Inspired by the ‘Asian Vulture Crisis’, in which exposure to the nonsteroidal anti-inflammatory drug (NSAID) diclofenac nearly brought three species of Gyps vultures to extinction, her PhD research sought to identify carcass parts – from highly decomposed animals – in which NSAIDs could be detected, to maximize the amount and breadth of information that could be collected after a mortality event.

Much of her work involves bridging the gap between those who specialize either in the repercussions of pesticides, or of veterinary agents, on wildlife as well as those who work in field and analytical settings. She has enjoyed a longstanding collaboration with a wildlife forensics network in Andalucía, Spain that has pioneered many innovative techniques – from training their field officers to impeccably process and gather evidence, to laboratory methods developed to squeeze out every possible bit of information to aid in the prosecution of crimes against wildlife and our environment.

Ngaio is also the Forensics & Field Specialist for Working Dogs for Conservation, a nonprofit in Montana that employs high-drive dogs – most adopted from shelters – to collect otherwise hard to gather information that is integral to conserving wildlife and their habitats. She is managed by a fastidious border collie named Orbee, who is also her primary working partner.