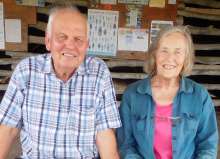 Professor John E Cooper, who has had a lifelong interest in natural history, originally trained as a British veterinary surgeon (veterinarian). He graduated in veterinary science and gained his MRCVS at the University of Bristol in 1966. He subsequently received postgraduate training and professional recognition in tropical veterinary medicine (DTVM), avian medicine and pathology (FRCVS), comparative pathology (FRCPath, Dip.ECVP) and biology (C.Biol, FRSB). He is a Diplomate of both the European College of Veterinary Pathologists (ECVP) and the European College of Zoological Medicine (ECZM).

Professor Cooper’s professional interests are in the areas of teaching, diagnostic pathology, forensic investigation, wildlife and ecosystem health, tropical diseases, zoonoses and human health. He is a member of a husband and wife team. His wife, Mrs Margaret E Cooper, is a lawyer who trained originally as a British solicitor and has made the study of animal and conservation law her special interest. She has contributed two of the lectures on this University of Florida Wildlife Forensic Pathology Course.

In May 2019 both the Coopers were awarded Honorary Fellowships of the Faculty of Forensic & Legal Medicine (FFLM) of the Royal College of Physicians, in recognition of their joint work and publications on animal law and forensic medicine.

The Coopers have traveled widely and lectured together in many countries. They have spent nearly twenty years living overseas, especially in Africa, including a period in Rwanda working with the mountain gorillas. In 2009 they returned from nearly seven years based at the University of the West Indies in Trinidad and Tobago, where they combined their medical and legal backgrounds in the promotion of an interdisciplinary approach to veterinary and biological education, wildlife conservation and forensic science. The Coopers have published extensively, over many years. They are joint authors of one of the first texts on veterinary (animal) forensics, “Introduction to Veterinary and Comparative Forensic Medicine” (Blackwell, 2007) and of “Wildlife Forensic Investigation: Principles and Practice” (Taylor and Francis/CRC, 2013). Their most recent text is about gorillas, both in the wild and in captivity – “Gorilla Pathology and Health……..” (Academic Press/Elsevier, 2017).